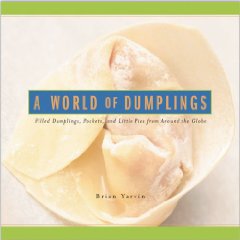 Brian Yarvin set out on a quest to compile 100 dumpling recipes from around the globe. I wish I had this book during Chinese New Year. From reading his book and making the Turkish manti, I have discovered that it really pays off to make the dough fresh. You can use the wrappers from the store, but if you are going to take the time to fill them, which is where the time is really taken up, then you might as well make the dough.

A wonderful book, A World of Dumplings offers many different ways to make them.  I chose to make the manti because my husband and I traveled in Turkey on our honeymoon. Eating manti was a whole new thing for us.  Essentially a Turkish ravioli served with a creamy yogurt sauce, manti was unlike anything I had ever had before and I was instantly in love! It is important to use a very high quality yogurt, like the Traders Point Creamery yogurt I wrote about in for the panna cotta a few weeks ago. These dumplings were incredibly easy to make and so tasty. I took a  few liberties with Yarvin’s recipe. In Turkey, our Manti were made with ground lamb and had some dried mint. I liked Yarvin’s yogurt sauce much better than the sauce we had in Turkey, but changed the procedure a bit. His addition of aleppo pepper which originates from Syria and has a fruity taste with mild heat, and the sumac (one of my favorites) provides a nice lemony flavor and turns the sauce a great color. I will use the sauce on lamb kabobs in the future, it is that good. I don’t have a pasta machine so my manti were a little thick but still yummy. You can assemble the manti a day ahead and keep refrigerated.

Turkish Manti with Brocoli Rabe, adapted from A World of Dumplings

Place the yogurt in a glass bowl, add the garlic and salt and stir to combine. Allow to sit while making the manti. Once manti are cooking, finish the sauce by heating the olive oil in a small skillet. Add the aleppo and sumac and allow to cook for a minute or two, Remove from heat. Once it is slightly cool, whisk it into the yogurt (which should be at room temperature). The sauce will take on a nice pinkish color.

Place the flour in a bowl and add the salt and egg. Pour in the water and with a wooden spoon, bring the dough together. With your hands, knead the dough lightly and then wrap in plastic and refrigerate for 30 minutes.

Place all ingredients in a  bowl and mix well. Place a large pot of water on to boil. Remove dough from the refrigerator and roll out to 1/8 inch thick adding a little flour to your rolling surface as needed to prevent sticking. Cut into 1 inch squares. Place about 1/4 tsp of the meat mixture into the center and bring the sides up to form a mini envelope. Press the seams together to seal. Bring a large pot of water to a boil. Place finished manti into the water. Once the water comes to a boil, lower heat and cook them for 6 minutes. Remove from water with a large slotted spoon. I boiled my rabe in the pot that the manti were going to be boiled in, took them out with a large slotted spoon and let them cool on a plate. I heated my cast iron skillet, added enough olive oil to cover the bottom, add the garlic and the rabe and stir it well until the rabe was hot. I placed the rabe in a bowl, placed 5 manti on top then added the yogurt sauce. PS from Kimberly: I am so going to make these!