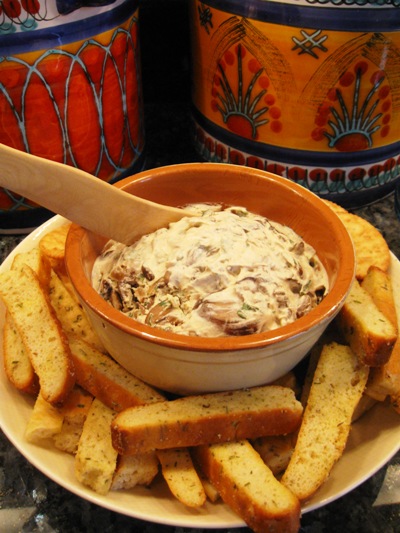 Before Christmas Barr offered up her Potted Shrimp recipe.  I brought some along to a holiday party and it garnered rave reviews, the “Can I have that recipe?” kind of rave reviews.

When I was making the shrimp, I thought replacing the shrimp with wild mushrooms would result in a seriously delish vegetarian starter.  We added these sherried shrooms to our Christmas buffet and along with my French Onion Soup, I was happy, happy happy.  The name change is simply because “Potted Mushrooms” sounded like something that should be growing in a garden, instead of being served on crackers. Heat 2 Tbsp. of the butter in a large skillet over medium heat. Add the bay leaf and the mushrooms, season generously with kosher salt and pepper.  Cook until mushrooms have given off all of their water and have begun to brown, about 15 minutes. Add the sherry and boil until the liquid is almost evaporated. Transfer the mixture to a bowl to cool.  Discard the bay leaf. Whip the remaining butter and cream cheese together. Add the mushrooms, herbs and lemon juice and mix until incorporated. Cover and refrigerate for at least 4 hours. Serve at room temperature with crostini or thin, crispy crackers. Baharat and Citrus Marinated Pork Tenderloin
The Best Stuffing Ever…