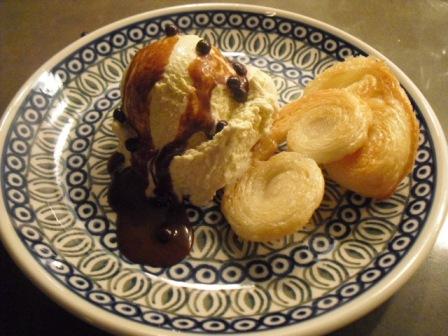 I bought a bag of Mayan spiced cocoa from Savory Spice Shop a while back.  In the winter I enjoy it prepared as hot chocolate. The heat from the chilies makes it especially warming on a cold, blustery day. Its unique blend of chilies, hazelnut powder, vanilla and cinnamon inspired this chocolate sauce. I served it on  on  homemade cinnamon ice cream with cinnamon sugar palmiers. The palmiers recipe is from Martha Holmberg’s gem of a book on recipes made with puff pastry entitled Puff.  You could also use gingersnaps or cinnamon shortbread cookies.

Heat the butter in a sauce pan; add sugar, cocoa cream and salt. Bring to a boil.Turn down heat and simmer for 5 minutes. Remove from heat.  Stir in rum and vanilla.