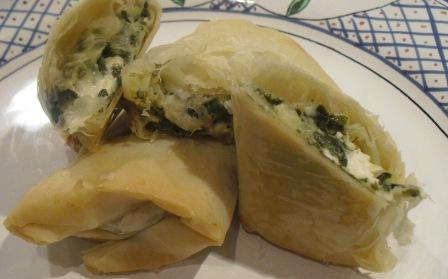 My most finicky eater has discovered “the only way to eat spinach.” Luckily I love it too. Costco sells on in the freezer section. It could use a little more feta for me so I will not abandon making it from scratch. One my favorite Greek cookbooks, Periyali has one of the best recipes I have ever tried. My other “go to” for Greek is How to Cook a Lamb has one too but I decided not to make it from this book though as it calls for bechemel sauce, which I like but somehow doesn’t appeal to me in this particular dish. It takes time to make spinach pie as you are working with phyllo sheets. The good news is that spanikopita freezes well. We are having a cocktail party in a few weeks so I made a few mini spanikopitas for that and froze them.While not traditional, I added some of my slow roasted Early Girl tomatoes the mini spinach pies for the cocktail party. Spanikopita adapted from The Periyali Cookbook.

The secret ingredient in the Periyali recipe is large curd cottage cheese, drained. I have also added a little lemon zest and sometimes I add plumped currents. Even though spanikopita is time consuming, if you make over a weekend you can freeze several and always have a Meatless Monday meal waiting in your freezer. The key is that you do not want your mixture to be too wet. If it is it will make the phyllo soggy.

1/2 cup extra-virgin olive oil
1 medium sized onion, diced
1 medium sized leek, sliced thinly and cleaned
1 large container of baby spinach (I use my oven roasting method) You can use frozen but it’s not as green and the spinach is so much wetter which means it takes longer to dry it out as you have to squeeze it with your hands.
2 Tbsp. freshly chopped dill (optional) Sometimes I use the Capital Hill Seasonings blend from Savory Spice instead.
1 tsp. salt
2 Eggs
3/4 cup crumbled feta cheese
1/2 pint large curd cottage cheese, drained
1 Tbsp. grated Parmesan cheese
1 Tbsp. dry bread crumbs, Panko works great

Heat 1 Tbsp. oil in a large skillet. Add the onions and leeks and cook over medium heat until lightly browned. Stir in the spinach. Add the remaining olive oil, dill, salt and pepper. Place mixture on to a cookie sheet and spread out and allow to cool. Once cool to the touch place in a bowl and add the mixed eggs, cheeses and bread crumbs.

Now you can make the spanikopita as a lasgane style dish which is much faster and easier if you are feeding a crowd. However it’s harder to freeze. The other option is to make smaller pies which are much easier to store in the freezer and nice to have on hand.

The key to working with phyllo is to move quickly.I like to use a mixture of olive oil and butter for brushing on the sheets. My kids like to brush the sheets. Once there are 4 layers of phyllo that are not saturated, but nicely brushed with the butter and oil, cut 4 rectangles with a sharp knife. Place a nice large spoon full of the filling the center and the lower end nearest you and make sure to have a nice 1/2 inch boarder on the left and right sides. Now all you have to do is roll the dough up like you would a burrito. Place on a parchment lined cookie sheet and continue with the rest of the phyllo sheets. Plae them in the refrigerator for a half hour before baking or freezing.

To Bake: Preheat the oven to 350 degrees. Bake the spanikopitas for 15 to 20 minutes or until golden brown. Remove from oven and allow to cool for a few minutes. I like to cut mine on the diagonal to serve them. These would go beautifully with Kimberly’s chickpea soup.

Meatless Monday: Revithia (Greek Chickpea Soup)
What to Give a Flavorista: 2010 Holiday Gift Round Up