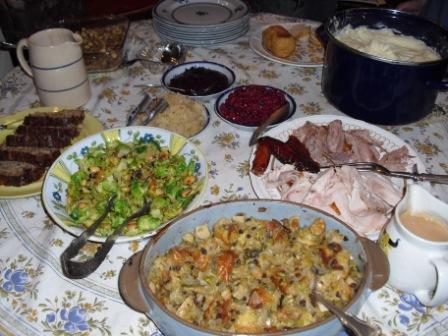 Two things that I was especially pleased with from this year’s feast were my  Brussel Sprouts Almondine and the stuffing I adapted from Mrs. Wheelbarrow over at Food52. Using Challah bread made for a very light and airy consistency. I don’t think I can go back to using cornbread or any other bread for that matter.  I now have a new go to stuffing, well technically a dressing as it is baked in its own dish. With such an abundance of food, a lighter stuffing is really nice. I think this would also make a nice nice meal on its own with salad. Since I was celebrating the holiday with vegetarians, I used vegetable stock but in the future I will use chicken or turkey stock. Large chunks or prosciutto would also be welcome!

Challah, Mushroom and Celery Dressing
This serves 12 easily but 6 if you were having it for dinner with a salad.

Cut the challah into 1″ cubes. Leave the cubes out on a parchment lined sheet pan on the counter to get stale, at least overnight, and preferably 2 days.

Melt 3 oz. of butter in a large heavy saute pan. Saute the onions until wilted, add the herbs, celery and mushrooms and cook until just slightly cooked through.  In a large bowl, combine bread cubes, vegetables, melted butter, stock, salt, pepper and currants. Test for seasoning and adjust.

Press stuffing into a large buttered baking dish. Cover with buttered parchment, and then foil. At this point, the stuffing can be held for several hours, but should be at room temperature before baking.  Bake at 350 for 45-55 minutes, the last 10-15 minutes without the foil and parchment, to crisp the surface.