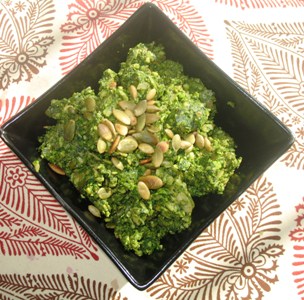 In an earlier post on green pumpkin seeds, I eluded to a pesto created by Tai Leavitt, of Val 21 restaurant in San Francisco.  Being the queen of schmootz, I offer this up as a great dipping sauce for roasted potatoes or grilled chicken.

At Val 21, we stuffed pepita pesto into chicken breasts.  We would pan fry the stuffed breast with a touch of heavy cream.  Between the cooking juices, pesto and cream, we had ourselves a lovely pan sauce that was always sopped up off the plate with bread.  I’ve never had it it on pasta, but think it’s a natural for a whole wheat penne.

Place the pepitas, spinach, cilantro and garlic into a food processor, reserving 2 Tbsp. of the pumpkin seeds to add later. With the processor running add the olive oil and the cheese through the feed tube. Remove from the bowl and fold in the remaining the pumpkins seeds. If desired, season with salt and pepper.